Jason is the editor here at RugbyLAD and a proud Limerick man.

Sir Clive Woodward described it as the biggest decision in the history of the Rugby World Cup as Japan refused to take three points and push for a famous victory against the mighty Boks.

Japan could have settled for a draw with a kickable penalty as time expired, but they decided to throw the dice in the hope of producing a winning try.

House of Rugby is back with a brand new URC show – hosted by RugbyLAD founder Jason Hennessy, Ireland international Megan Williams and Olympic sevens star, Greg O'Shea. Follow and subscribe to it HERE.

The risk paid off as Japan produced the greatest ever Wolrd Cup upset, shocking the Springboks 34-32.

But the history books would have read quite differently if not for a chat Japan coach Eddie Jones had with the New Zealand-born Leitch over a coffee on the morning of the game.

“You want the truth? I was screaming in the radio, saying, ‘Take the three [points],” Jones admitted to Sydney’s Sky Sports radio on Monday.

“I went and had coffee with the captain in the morning [before the game], down at the beach at Brighton — it was actually a sunny day, so that was amazing — and I said to him, ‘When we get penalties, if you think you want to give it a go, just give it a go. We’ve got nothing to lose.’ And that’s what he did.”

“It was a great call … a fantastic call by the skipper.” 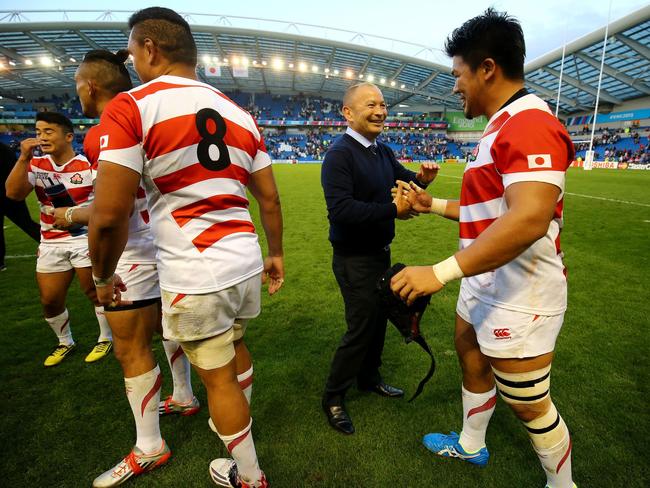 The South Africans have come under heavy fire from back home after the extraordinary defeat and are now in danger of not qualifying from Pool B if they do not win their next match against Samoa in Birmingham on Saturday.

“I would hate to be Samoa in the next game,” Jones added. “[South Africa] will come out breathing fire.”

The criticism included calls from South Africa’s main trade union for coach Heyneke Meyer to be fired. There was also widespread anger among fans.

“We need to write it off and move forward as quickly as possible,” South Africa veteran Schalk Burger said.

“The first thing to understand is why we lost, why Japan put us under so much pressure.

“As soon as we understand what the weaknesses are that were exposed in that game, we can move forward. That must happen fast.

“We need to put the game behind us and focus on Samoa.”

Burger, who plays club rugby for Japanese side Suntory Sungoliath, praised Japan’s effort as “phenomenal” and a major move forward for Japanese rugby union and the global game.

“I’ve got six teammates that were on the field and obviously after the match we had a group chat with those who can understand English, and they’re over the moon,” Burger said.

“For the last six months they were targeting us and they got it right. Credit to (coach) Eddie Jones, it was a phenomenal performance.

“We were on the receiving end and we will watch this game on the highlights reel for years to come, but for rugby as a whole and for Japan — hosting the next World Cup — it’s the best thing that could have happened.”

However, Burger warned that tough tests still awaited the Brave Blossoms at this World Cup.

“For Japan the next challenge is Scotland on Wednesday.”

Samoa opened their World Cup campaign with a 25-16 win over the United States in Brighton on Sunday.